Posted on August 16, 2012 by The Contrarian Hungarian

Csanád Szegedi is a despicable politician even by Hungarian standards, and when his Jewish origins were leaked to the public, it was mostly my disgust that held me back from writing about his “troubles.” For months before revelations that his maternal grandmother was Jewish, Szegedi had already been at the center of a vicious party feud within his party Jobbik. It was this dispute – financial and political nature, with neither side virtuous enough for us to care – that took an ugly turn when Szegedi’s Jewish ancestry got mixed into the dispute.

Nevertheless, the twisted story of the anti-semitic politician expelled  from his party because of his Jewish roots was understandably too good to pass on for the journalists of the world. In the AP’s report, there was already a slight reference to Szegedi’s potential mishandling of EU funds: when Szegedi chose to deny having any knowledge of his family origins, a certain Zoltán Ambrus – a person with multiple criminal convictions most especially for crimes related to gun smuggling – leaked a recording of his conversation with the EP representative, during which Szegedi seems to have offered EU funds to buy his silence.

But this is not the whole story involving Szegedi’s questionable use of EU funds. The far-right politician, one among three representatives of the Jobbik party in the European Parliament, sits on one of the most important economic “assets” of the party. While involved with Jobbik, Szegedi therefore did not only rank high in the leadership of Jobbik, but also had ownership – along with other party leaders – in several of the business that are driving considerable profits from the ultranationalistic sentiment whipped up during their party’s events.

Which gives one plenty to write about Szegedi without making any reference whatsoever to his ancestry. Let’s take them one after another: the in-party feud, the business interests, and the abuse of EU funds.

Air Raid Siren and Kalashnikov Shots: The Struggle for the Leadership of the Borsod-Abaúj-Zemplén Local

As already mentioned,  other than to raise the already toxic level of anti-semitism in Hungary, Szegedi’s Jewish origins were exploited to provide a compelling narrative for a lengthy political in-fight within Jobbik. Indeed, news of the identity of Szegedi’s ancestors followed only days after Szegedi’s election as chair of Jobbik’s Borsod-Abaúj-Zemplén local (though the AP story that propelled the far-right politician into world-wide fame is from mid-August, the news broke in Hungary in late June – see this story for the original implications of the Szegedi story for anti-semitic sentiments in Hungary).

In-fighting within the Hungarian far-right often serves with comic episodes, and the story of Szegedi vs. enemies is no exception. During a May Day picnic, it pitted member of the Hungarian parliament Előd Novák, one of Szegedi’s closest allies within the party, against a certain Zsolt Endrésik, another MP and previously the leader of the Borsod-Abaúj-Zemplén Jobbik organization – who by that time had been expelled from the party because of his dispute with Szegedi.

First, Előd Novák’s speech got rudely interrupted by the use of an air raid siren (video), ostensibly operated by Endrésik’s supporters to block out the sound coming from Novák’s microphone. This was followed – as proudly recorded for eternity in another video – by rounds of machine gun fire intended to give additional emphasis to part’s of Endrésik’s duelling speech.

By the way, Endrésik already  vowed to make a few “revelations” about Szegedi and his brother in this speech, no doubt referring to their grandmother’s identity (be sure to watch all the way to 2:25 if you can follow the Hungarian).

Incidentally, the machine guns were operated by Endrésik supporters calling themselves the Rongyos Hagyományőrző Egyesület (the Raggedy Association for Preserving Traditions). Contrary to press reports about Kalashnikovs, the guns fired at the event were six AM and two VZ rifles. This according Zoltán Ambruzs, the leader of the Raggady Association, who already featured into Szegedi’s story as the gun smuggler who had confronted Szegedi about his Jewishness back in 2010. To be sure, the police seized all eight guns used during the May Day celebration (they have a few dozen more, countered Ambruzs in a press interview – the fate of the air raid siren is unknown).

Borsod-Abaúj-Zemplén county, the main stake in the dispute, is in one of the most impoverished areas of Hungary. Jobbik is popular here because they openly advocate anti-Roma policies, whom many in the region use as scapegoats for the difficult living conditions in the region. Jobbik offers a fast solution to anyone who might believe that the region’s problems can be boiled down to the presence of an ethnic minority: they want to incarcerate or even expel members of the ethnic group whom they believe to be conducting a war against Hungarians (for some of this confused rhetoric, see the speeches given at this recent demonstration against “gypsy criminality”). Jobbik’s contention that it is the genetically coded “nature” of the Roma to commit crimes has thus gained much traction with those seeking an easy escape from the economic problems affecting the region. The local Jobbik organization is strong, and paramilitaries keen to engage in vigilante justice in the county’s villages offer hands-on “political” training in the party and its affiliated groups.

This, of course, is just another way of saying that control over the party’s Borsod-Abaúj-Zemplén country unit is a racket for any politician crafty enough to combine the political and financial opportunities that stem from holding political office in Hungary. Szegedi is certainly good at this, but as it turns out, there are several other high-ranking Jobbik politicians closely allied with him not only in his political struggles but in business ventures as well.

One of the business in question is a media firm that Szegedi previously co-owned with Jobbik party chairman Gábor Vona and Vona’s wife. Another is a clothing store which he used to co-own with the party’s main director, Gábor Szabó. For now, Szegedi quit these financial enterprises, handing over his shares to a “third party.”

The businesses in question capitalize on the resurgence of ultranationalistic sentiment created by the Jobbik party in Hungary: with the Vonas, Szegedi drew profit from the advertisement income of the party’s hate speech print publication Barikád; with Szabó, they sold nationalist apparel for party supporters to show their Hungarian pride (Szegedi’s business connections with Jobbik leaders were reported by the Hungarian-language pro-government daily Magyar Nemzet).

But Szegedi retains under his control one of the most lucrative positions within the party: the budget he handles as an elected member of the European Parliament. And as documents leaked from Brussels prove, this remains an important reason for his previous allies to remain on friendly terms with him no matter how one spins the story about his Jewish family roots.

The EU’s Indirect Funding of a Hate-Speech Propaganda Site

Though Szegedi campaigned on an anti-EU platform to become Hungary’s representative in the European Parliament, as MEP he still draws on a monthly discretionary budget of 21,000 euros. Official documents show that Szegedi used these funds to hire “local representatives” or assistants in Hungary. Szegedi’s assistants happened to be some of his best buddies in the party. What is of particular interest, however, is his funneling of money to a group of comrades who are widely considered to be the coordinators in the clandestine operations of an internet site known for its beyond-the-pale extremist propaganda.

Though the operations of the internet  site KurucInfo are shrouded in secrecy, three persons are identified over and over again as persons most active in its operation. All three of them received financial support from Mr. Szegedi. Member of parliament Előd Novák (the same above-mentioned Előd Novák) was paid 3,500 euros over the course of five months during 2010. Balázs Molnár received a similar sum: about 3,700  euros in the period between 2010 and 2012. Roland Kürk was paid a “salary” of 3,000 euros in 2010 and 12,000 euros in 2011.

Though it is quite likely that these payment were directly put into the financing of the hate-speech portal, Szegedi’s three “assistants” claim that these monies were paid to them as “a classic type of a salary.” Even so, the poor in Hungary, many of whom are followers of Jobbik, often receive a “salary” equivalent to the minimum wage: 170 euros a month.

Whether MEP Szegedi was interested in supporting his party through the money that likely ended up with KurucInfo or whether he was buying the site’s loyalty is unclear. The close alliance between the internet portal and Szegedi is well-known: the influential internet publication actively supported Szegedi in the Borsod-Abaúj-Zemplén political dispute, and delayed publishing the documents which have now made Szegedi a pariah among Jobbik circles.

Here is salaried employee of the EU Előd Novák during an EU flag-burning protest during which both he and Szegedi railed in speeches against the EU’s supposed “colonization” of Hungary: 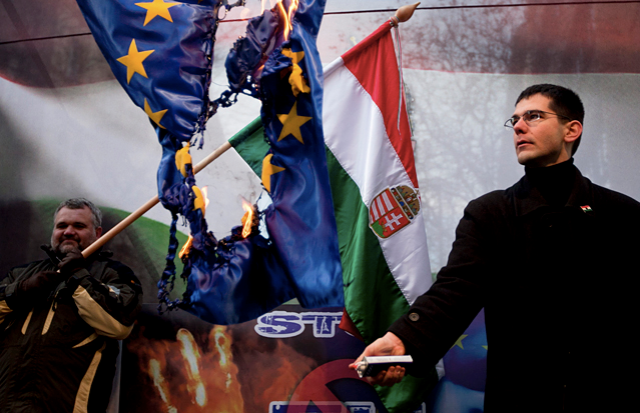 As the journalists of HVG, a Hungarian-language weekly that first reported on the financial documents tying Szegedi to the hate speech portal wrote: here’s one a disgruntled employee, if there ever was one.

Though the reports about Szegedi speak of an irreparable rift between the MEP and his fellow Jobbik politicians, as in the case of any major scandal within the Hungarian far-right, there is reason to take the seriousness of these disputes with a grain of salt.

Far from being remorseful about his political beliefs upon discovering his family’s history, Szegedi is now busy to start his own party. It is going to be a party even more radical than Jobbik, he says. But before breathing a sigh of relief that this might split the far-right vote in Hungary, consider the unfortunate precedent of Jobbik, which was founded in order provide a more extreme alternative for Hungarian voters than the then-existing MIÉP party. Rather than weakening the far-right, on the long run, it only radicalized the Hungarian electorate.